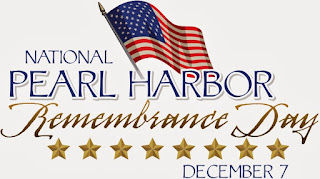 It's a day that most people don't recall,
But so many Americans had taken a fall.
So many lives were taken on that day,
And very few survivors are now gray.

It was a peaceful morning calm as can be,
Until the tragedy no one was able to see.
The world was at war but it wasn't our fight,
But that would soon change overnight.

It was a land of beauty and such paradise,
But it would soon be held in Satan's vice.
The air was filled with an ocean breeze,
But our tranquility they would soon cease.

The enemy arrived with a sneak attack,
And we didn't have enough time to react.
They came in so fast and had hit us hard,
Because they caught us off guard.

As quickly as they arrived they were gone,
In this vicious assault right after dawn.
So many innocent people were killed,
Leaving many voids to never be filled.

As the enemy returned back out to sea,
There was devastation for the world to see.
The mission now was to rescue and save,
And find others who were bound for a grave.

When it was over there was only one thought,
To return the wrath that they had brought.
We weren't a nation at peace any more,
After the Japanese had just declared war.