This week's Sunday Stealing was stolen from the "IF" book. 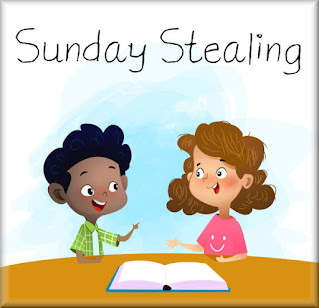 1. If you could change the ending to one movie you have seen, which one would it be, and how would you reshoot it?

Gone With The Wind.  I would give it a "happy ever after" type of ending.

2. If you were to select a food that best describes your character, what food would it be?
A strawberry.  I am sweet like a strawberry and a favorite of many people.
3. If you could cure any disease, which would it be?
Cancer

4. If you had to describe the single worst thing a friend could do to you, what would it be?

She slept with my first husband, while he and I were still married.

5. If you could be a contestant on any game show, which would you like to be on?
Press Your Luck

6. If you could choose the music at your own funeral, what would it be, and who would play it?

I would leave it up to whomever plans my funeral.  I want the music to make those in attendance feel comfortable.

7. If you had to spend all of your vacations for the rest of your life in the same place, where would you go?
Somewhere near a beach.

8. If you could ask God a single question, what would it be?
What do I have to die?
9. If you could eat one food in any quantity for the rest of your life with no ill effects whatsoever what food would you choose?
Chocolate

10. If you could have a year any place in the world, all expenses paid, where would you go?
Ireland

11. If you could forever eliminate one specific type of prejudice from the earth, which would it be?
Racism

12. If you could own one painting from any collection in the world but were not allowed to sell it, which work of art would you select?
The Starry Night by Van Gough

13. If you could ask a single question of a dead relative, what would it be and of whom would you ask it?

I would ask my grandpa to tell me more stories of the good old days.

14. If you had to choose the best television show ever made, which one would you pick?

15. If you could write letters to only one person for the rest of your life, who would receive them?
My daughter