This week's Sunday Stealing was stolen from Swap Bot! 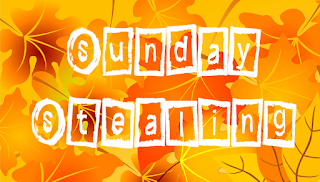 What mythical creature would improve the world most if it existed?

What inanimate object do you wish you could eliminate from existence?

What is the weirdest thing you have seen in someone else’s home?

What would be the absolute worst name you could give your child?
Messiah

What would be the worst thing for the government to make illegal?
Owning a pet(s)

What movie would be greatly improved if it was made into a musical?
Edward Scissorhands

What would be the worst “buy one get one free” sale of all time?
Coffins
What is the funniest name you have actually heard used in the real world?
North West

What sport would be the funniest to add a mandatory amount of alcohol to?

What would be the coolest animal to scale up to the size of a horse?

What set of items could you buy that would make the cashier the most uncomfortable?

What is something that you just recently realized that you are embarrassed you didn't realize earlier?
I cannot think of anything right now.

What are some fun and interesting alternatives to war that countries could settle their differences with?
They could play checkers, or chess or maybe Monopoly.