This week's Sunday Stealing was stolen from mantelligence. 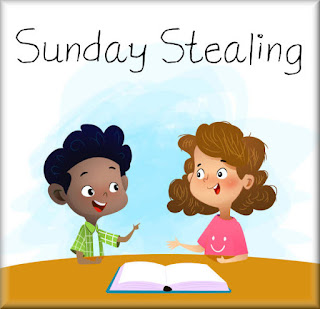 1. What is the craziest, most outrageous thing you want to achieve?
This may not be crazy or outrageous to some people, but I would like to try parasailing before I die.

3. What is a fashion trend you’re glad went away.
Jelly shoes....they were cute but uncomfortable.

4. What word or saying from the past do you think should come back?
"Cool Beans" is one saying that I use often.  I think this saying should make a come back!

5. What do you bring with you everywhere you go?
My cell phone, in case of emergency.

6. Is there such a thing as a soul?
I believe all living beings have a soul.

7. Is there life after death?
There is life after death we someone we love dies. Such as when my son died, I have continued to live.  My life after his death has an empty spot in it without him.  For me personably, when I die, I do not think I will have a life after death.  Once, I am dead, I am just that....dead.

8. Do you think there will ever be a third world war?
I think it is possible.

I like a wide variety of music.  Everything from AC/DC to ZZ Top, 80's. 90's, 2000's, current, country, grunge, hard rock, rap, and more.
12. What is the biggest surprise of your life?
The biggest surprise was when I found out I was pregnant with my son.  I was very sick and was not getting better.  The doctor ran a pregnancy test before giving me some different medication.  The test came back positive so the doctor had to come up with a new treatment plan.  I was so shocked (but very happy) at being pregnant.

13. If you could eat only one thing for the rest of your life, what would it be?
Chocolate!

14. Where is the most awe inspiring place you have been?
When I was a child, seeing the ocean for the very first time was amazing.  It was so exciting watching the waves crash into the shore.
15. Describe your life in six words.
Work, Sleep, Eat, Caregiving, Existing, Stressing.