This week's Sunday Stealing was stolen from various web sites. 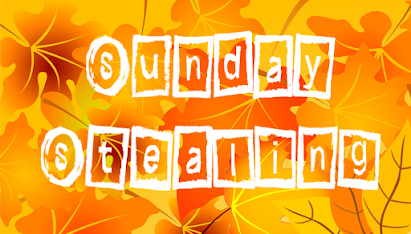 2. What is the fattest thing you’ve ever done? Eaten food to the point of throwing up from being over full.

3. If you’re going to be arrested what do you want your crime to be? I want my crime to be that I cared too much.

4. When they say dog food is “new and improved” who tastes it?  I assume dogs test it.

5. What’s the ugliest thing you’ve ever seen? Me when I cry.

6. Why doesn’t glue stick to its bottle?  The bottle is made of anti-sticky matter.

7. What historical event do you wish you’d witnessed? None that I can think of.

8. Who has had the best influence on your life? Several people.

9. Would you rather go into space or to Antarctica? Space

11. What's your favorite rain memory? Sitting in a tent with my kids and our dog next to a beautiful lake.  The rain was falling on the tent and we fell asleep to that sound.  We woke up a few hours later to a huge storm outside and we were soaked because the tent leaked (a lot).  We ended up sleeping in the car.

12. If you were elected president, what is the first thing you would do?  I would wonder how I the hell I made it there.

14. What’s the most annoying sound in the world? Someone running their fingernails down a chalkboard.

15. What natural disaster scares you the most? Wildfire...like the fires in California. I do not want to burn to death.