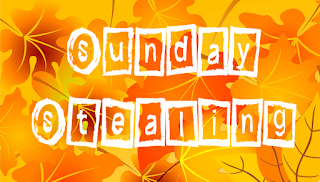 This week's Sunday Stealing was stolen from Funny Questions.

1. If You Could Use A Time Machine To Go Back In Time To Fix One Thing Or Go To The Future To See What It Is Like Which Would You Do?
I would like to go back in time and be there with my son when he passes.

2. If All Of A Sudden There Was A Depression Or There Were No Stores To Buy Food, Clothing, Etc. How Would You Manage?
I would plant a garden, make clothing out of whatever I can find and find water.

3. Are You Concerned With What Other People Think About You?
Sometimes but not as much as it did when I was younger.

I am kind to them but do my best to get away from them as quickly as possible.

5. What Do You Think Of Garden Gnomes?
Garden gnomes are ok.  I don't prefer to decorate my house with them.

6. You’ve Been Given An Elephant. You Can’t Give It Away Or Sell It. What Would You Do With The Elephant?

Buy some land and build the elephant and I a nice place to live.

7. How Would You Design A Spice Rack For The Blind?
I would label the shelf and each bottle with the name of things in braille.

10. What’s the most embarrassing thing that happened to you in school?
In high school, the back of my pants were rather gross to look at  (woman thing) and I was too embarrassed to leave my seat.  A friend of mine (male) understood and gave me his jacket to cover up with.

11. If you could kill off any character from a current television show, who would it be?

None that I can think of.
12 . If you could make a rule for a day and everyone had to follow it, what would it be?

The rule would be: Everyone MUST be kind to each other.
13. Would you rather be a hobbit or an elf for 24 hours?

I would rather be a hobbit.
14. What’s the craziest thing you’ve ever done?