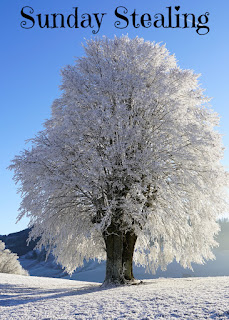 This week's Sunday Stealing was stolen from The Queen's Meme.

1. January usually has ample amounts of snowfall in parts of the world. Did you ever make snow cream as a kid?

Of course! And I still make it now and then. Yummy!

2. January is one of the months with 31 days. What are you going to do with that extra day?

It does not feel like an extra day. It if was a true extra day I would spend the day relaxing in bed.

3. What is your favorite magazine?

4. If you live to be 99 years old, what would you like your life to be like in that last decade??

I would not mind if cockroaches went extinct. They are so gross.  There are many of the extinct species I would like to bring back, to include the Northern White Rhino and the Passenger Pigeon.

6. On January 14, 1986 motorists were required for the first time to wear seat belts?
Do you always buckle up? Why or why not?

I always buckle up, and I buckle up properly.  I feel safer with my seat belt on. Also, I believe my mom would have possibly survived the car crash that killed her if she had been wearing her seat belt properly.

7. Why did the cow jump over the moon?

The cow jumped over the moon because she was extremely happy.

9. Have you said anything in the last 24 hours that you regret?

Nothing I can think of.

10. Have you ever written anything on your blog that you wish you could take back?

I am sure I have, I just don't remember what it was.

11. Are you the blabber or the blabbee? Tell us your most embarrassing blabbermouth moment.

I do not like gossip and blabbering. I think it can be very hurtful, so I do my best to not be either.

12. How important is a cell phone in your life?

It is very important to me because it keeps me in touch with my loved ones at all times.

13. A "cuisine" is typically influenced by and named after geographical regions and cultures. Pretend your blog is a country. What is the name of your cuisine?

Moment Food!  At this moment in time, this is the food we will eat.

14. You are the Blog Paparazzi! Which blogger's real photograph are you most interested in getting?

16. Can you think of a time when you were late for something and it was REALLY a big deal?

Many, many, many years ago I was late to work twice in one week and was fired.

17. If you were on your way to work and had five minutes to get there, would you stop in the road to rescue a crossing turtle?

I would stop to recuse the turtle. The boss can yell at me later.

18. When you are having a really good day, what usually makes it good?

19. What is the most annoying Christmas song?

20. You are Snow White. Which dwarf is your favorite and why?

Sleepy is my favorite dwarf, because I too, am always sleepy.