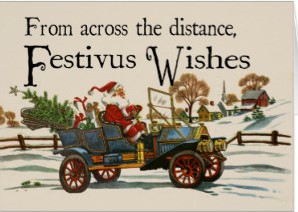 Festivus was conceived by author and editor Daniel O'Keefe, the father of TV writer Dan O'Keefe, and was celebrated by his family as early as 1966. The word Festivus in this sense was coined by the elder O'Keefe, and according to him the name "just popped into my head." In the original O'Keefe tradition, the holiday would take place to celebrate the anniversary of Daniel O'Keefe's first date with his future wife, Deborah. The phrase "a Festivus for the rest of us" originally referred to those remaining after the death of the elder O'Keefe's mother, Jeanette, in 1976; i.e., the "rest of us" are the living, as opposed to the dead.

In 1982, Daniel O'Keefe wrote a book, Stolen Lightning: The Social Theory of Magic, that deals with idiosyncratic ritual and its social significance, a theme relevant to Festivus tradition.

It is now celebrated on December 23, as depicted in the Seinfeld episode written by the younger O'Keefe.

Read More about Festivus at the following links:
http://festivusweb.com/
https://en.wikipedia.org/wiki/Festivus