I posted the following on this blog for my son, Richard Colt Hazlett. You are more than welcome to go to the link and post a comment or to post a comment here...please be kind.

Richard Colt Hazlett was born on November 8, 1992 in Farmington, Missouri, to Richard Patrick Hazlett and Shannon Pinkley-Hazlett. Colt passed away after a very short, intense battle with Acute Myeloid Leukemia on March 10, 2016 in Dallas Texas.

In February 2011, Colt graduated from Bangor High School in Bangor, Wisconsin. He joined the United States Army and took Basic/AIT in Fort Benning, Georgia. After training, Colt was stationed for a year in the State of Washington. After the Army, Colt worked various jobs but mostly in the oil field and construction.

Colt was preceded in death by his grandparents, William "Bill" Pinkley and Vickie Sue Henson-Pinkley, both of Annapolis, Missouri.

Thank you to Gemini Alexander Brooks for being with Colt. Words will never be able to express the gratitude I feel. You have a beautiful soul and I feel truly blessed to call you my friend. 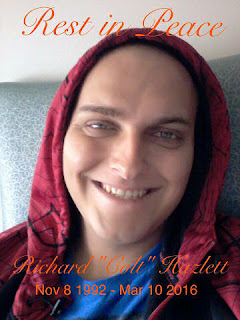