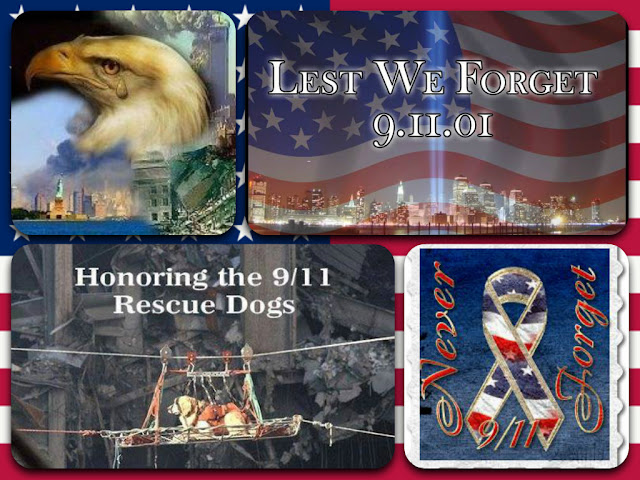 "The United States is under attack" was all I could hear
On the radio and TV, now the nation was in fear.
The bystanders looking pointing above their heads
Family members calling in hopes loved ones weren't dead.
Sirens started blaring, cries were certainly heard
"Oh my God" was the consensus of American words.
Tears started pouring as the television showed the world
The second plane hitting, more like it hurled.

Terrorist attacked in hopes to put us in despair
Pearl Harbor is the only attack for US to compare
The tragedy, the lives lost with no remorse.
Al-Quida received our attention from using blunt force.
After what seemed like forever, the towers started to fall.
People started running, the cameras caught it all.
I remember desperate acts of people falling to their death
I sat in my living room crying, just holding my breath.

"How could this happen, I don't understand
Who could be bold enough to touch on our land?"
I couldn't conceive of the actions taking place
I couldn't imagine the people that were lost that couldn't be replaced.
I thought of our Navy and armed forces making things right
But death could reach my life in their retaliating fight.

The city was covered in dust and smoke
It was so bad you could hear the reporters even choke.
The blanket filled the air and Ground Zero slowly emerged
Those that were inside and heroes that went in were now submerged
Under the drywall, concrete, office supplies and parts of planes
Many will have death of a parent and loved one to explain
To children that were left behind on September 11, 2001
The rebuilding of our Nation has now begun.

Family members gathered, loved ones soon came
To Ground Zero wishing to some how reclaim
That morning, that afternoon, all those days to follow
All the events of America were very hard to swallow.
But we got together and lit a candle, strength in the flame
We stood together with one thing to proclaim
The US isn't falling, we will stand our ground
And when you awoke the next morning patriotism was found.

Flags were flying high on houses across the states
In cars, on buses, on clothes, on anything we could create.
The building may have fallen, but the foundation didn't break
Those that attacked us soon found that mistake.
We as a nation stood as one on that tragic day
And that is how we as a Nation should stay.

To the families, loved ones, and lost... your memory will never depart.
You touched the Nation, and will remain in our hearts.